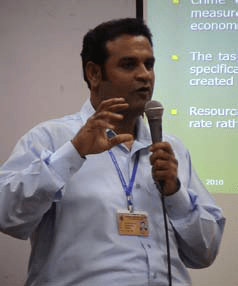 Shabib Haider Syed Chairman, Department of Economics, Forman Christian College (A Chartered University), has published various papers including “The behavior of FDI in South Asian Countries”, “Public Policy and Private Investment”, “Modern Economics and its Non-Human Face”, “An Analysis of Willingness to Pay for Pollen Allergy in Islamabad”, and “Deterrence of Crime against Property and Person in Pakistan – A Time Series Analysis”. He gave a talk on “Poverty, Inequality, Political Instability and Property Crimes in Pakistan:  A Time Series Analysis” at the Centre for Public Policy & Governance (CPPG) on the 12th of April 2010.

Dr. Syed opened his remarks by stating that when he chose to pursue his doctoral research on the topic of “Crime and its linkages with poverty, inequality and political instability”, he was discouraged as it was considered an unusual topic where data collection would be a difficult task. Despite the constraints he took the challenge of collecting data, visiting prisons, dealing with the judiciary and police, and conducted research on the topic. But given the sensitive nature of the data, he had made a commitment to government officials to maintain confidentiality and had waited ten years before releasing and sharing his research work.

Dr. Syed examined how crime impacts the functioning of economic markets thus making it a pertinent subject. To substantiate his point, he referred to the World Development Report 1997, which argued that development of markets required effectively implemented and enforced property rights. To assess the effectiveness of property rights, Syed further quoted that the following three conditions must be met; first, people’s lives and property should be secure and they should not be victimized by theft, violence or other acts of predation. Second, they should be protected from arbitrary government actions and third that there must be a reasonably fair and predictable judiciary. Precluding these conditions would impair the smooth functioning of markets.

Crime was perceived differently by academics across different disciplines; an economist’s perception varied significantly from that of a criminologist or a psychologist. Criminologists and psychologists attributed crime to factors influencing the psychological state of the criminal or peculiarities of his environment and life provoking him to commit a crime. Economic theory of crime, however, propounded that all criminals were rational beings and they made their decisions by weighing the expected benefit against the expected costs of committing a particular crime. Syed’s research looked at crime from an economics perspective; the hypothesis being that criminals on average acted rationally to the incentives and deterrents offered by their socioeconomic environment and the criminal justice system.

“Economic theory of crime, however, propounded that all criminals were rational beings and they made their decisions by weighing the expected benefit against the expected cost of committing a particular crime.”

Explaining the research methodology, he listed the five researched categories of crimes; dacoity, burglary, robbery, cattle theft and theft. A three simultaneous equations model had been implemented to explore respected causal relationships. The first Supply of Crime equation assessed the impact of the probability of conviction, expenditure on law enforcement, fine, per-capita income, income inequality, poverty, unemployment and population share of 15-25 year old on the crime rate. The second Production Function of Law Enforcement equation explored the performance of the legal system by measuring the probability of conviction against government expenditure on law enforcement, political instability, fine and the crime rate. The third Demand Function for Law Enforcement equation assessed per capita government expenditure on Police and Justice against aggregate crime and the crime rate. Each of the five categories of crime was explored through the three simultaneous equation model, thus entailing a total of 15 equations.

Dr. Syed was forceful in suggesting that his research brought out insights regarding the crime situation as well as the criminal justice system of Pakistan. In terms of the crime rate, the research showed that controlling inequality and poverty could reduce crime but reducing unemployment did not necessarily have the same impact. Thus he claimed that crime control could be greatly improved by appropriate fiscal measures and socio-economic reforms. Investment in educational systems, offering quality education and equal opportunities for the rich and poor could have significantly positive impacts. Such policy choices addressing income inequality and poverty could empower the poor and create better earning opportunities for them, to help reduce the crime rate.

“… the probability of conviction had a greater effect on crime control as compared to the severity of punishment.”

Focusing on the criminal justice system, he argued that the probability of conviction had a greater effect on crime control as compared to the severity of punishment. Thus an improvement in the legal system should concentrate on increasing the probability of conviction. This could be brought about not by mere increases in government expenditure but rather by systematic and sensible allocation of funds, which would serve to improve the system’s efficiency and functioning. One example for a more productive allocation of government funds could be that instead of increasing police officials’ salaries, investment should be made in techniques and technology for better crime investigation. Additionally resources needed to be diverted towards achieving higher conviction rates rather than administration of severe punishment as the former had proved more effective in Pakistan. Political instability was another important factor that reduced the probability of conviction, making the system more inefficient. Thus suggesting that the overall political environment had an impact on the crime rate.

Reflecting on how police reforms should be designed to improve the efficiency and performance of police; Syed pleaded for changing the cultural norms in society as they directly influenced the functioning of the legal and judicial systems. In Pakistan, the lower courts were rampant with corruption while according to prescribed norms a criminal might actually be treated with more respect than an innocent person at a police station. He argued that societal norms played an important role in curbing crime rate in a society. In our case, the legal system was inefficient once a criminal was identified and thus the probability of getting him convicted was low. Another difficulty was that more importance was given to crimes against a person as compared to crimes against property, thus property rights did not get due attention. In many cases, either police reduced the intensity of the crime – changed dacoity into robbery and robbery into theft or put hurdles in the filing of the FIR to reduce their liability to the bosses. For a common person, the cost of reporting a minor crime such as theft was extremely high, as significant amount of time was needed just to convince the police to register the FIR. Additionally a society, which allowed criminals to secure employment as easily as any other citizen after being released from jail exempted them from bearing any real or substantial consequence of committing a crime. Thus policies needed to incorporate reforms to change the culture as well as to increase the stakes of crime.

“Even if the Supreme and High Courts were relatively efficient, the crime situation could not be changed unless systems were improved at the grass roots level.”

In conclusion, while making an overall appraisal of the criminal justice system, Syed argued that the criminal justice system had failed to deliver not in the upper courts including the High court or the Supreme Court, but the lower courts which catered to the masses and dealt with crimes affecting the underprivileged classes. Even if the Supreme and High Courts were relatively efficient, the crime situation could not be changed unless systems were improved at the grass roots level.

When asked how he convinced jail authorities to share the data, he responded by stating that data collection was an art in itself. Researchers had to be very flexible and intelligent especially if their subject of choice required acquiring sensitive data. While responding to a question that he had concentration on the linkages between crime, poverty and inequality without mentioning crimes committed by the rich and powerful, Syed explained that crimes committed by the wealthy and influential were usually unidentified or unrecorded, and thus without availability of data they could not become a potential area for research.