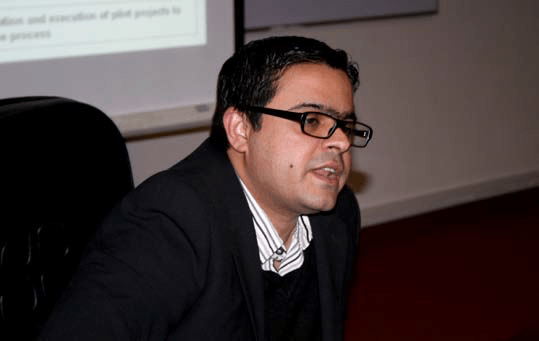 : Mr. Hasaan Khawar, a consultant with the Punjab Resource Management Program (PRMP) and a former civil servant was invited by the Centre for Public Policy & Governance (CPPG) to deliver a talk on “Public Private Partnership: Showing Punjab” on the 1st of February, 2010. Khawar opened his remarks by explaining that Public Private Partnership (PPP) was part of the broader private sector development umbrella including an enabling policy regime, business development support services, cluster development and common facility centres. According to different perceptions currently in vogue, a company formed by government’s investment and run by the private sector, and a policy dialogue involving Public and Private sectors may be referred to as PPP but technically speaking they were not. Internationally the term PPP was used in the context of Project Financing. PPP could be defined as long term contractual arrangements between the Public and Private Sector company for provision of infrastructure services with a fair allocation of risk. Thus conceptually, PPP entailed the following four components:

• Longer term contract rather than a one off transaction

• Transfer part of the risk to the private sector

Elaborating these components, Khawar specified different forms of PPP including service contracts, management contracts, lease contracts, concessions and finally variousnotions of Build-Operate-Transfer (BOT) suggesting that the responsibility of the private sector increased as one moved down the list from service contracts to BOT. Khawar then explored the project life cycle of a PPP project. It began with project inception stage in which the government picked a project for PPP from a list of projects it wanted to undertake; the second stage was project preparation which involved creating a feasibility study of the project detailing modes of services, and aspects of financial bidding thus providing the necessary requirement for negotiation; the third was transaction execution stage involving the selection of private partner by the government. This process could either be done very quickly without lengthy paper work or involve extensive transparency. The last stage was construction, operation and transfer depending on the modalities agreed upon by the Government and the Private Party involved.

Khawar then asked the question “What and why was there a need for PPP?” to the audience before beginning to answer it. He stated a number of reasons beginning with investment needs. He argued that historically PPPs was undertaken in areas that were traditionally part of government’s domain but lacked financial resources. While in the case of serious fiscal constraints, Government of Punjab could not finance needed projects, but even in the absence of fiscal constraints, it was not possible to finance every project due to scarcity of resources, opportunity costs or lack of expertise. Additionally PPP helped improve the efficiency of public investments. With limited government resources, it helped Government undertake lower priority initiatives that the Government did not have funds for. PPP also allowed the government to get better value for money through projects costing less than government constructed projects. But for developing countries, financial constraints were the most important reason behind PPP supported by the fact that close correlation existed between Infrastructure Investment and GDP growth, thus PPP could improve GDP growth with unchanged government resources. China had been investing about 9-10% of their GDP to sustain a 12% GDP growth rate. Malaysia was investing 6% of its GDP before 1997 with GDP growth rate at around 8%. Though its investment rate fell to 2-3% of GDP after the Southeast Asian financial crisis, it was now back on track. For Pakistan, the infrastructure development investments were not up to the required level hampering sustainable development as could be observed especially in the energy and transport sectors.

Khawar stated that according to World Bank estimates, one percent increase in a country’s infrastructure stock led to one percent increase in the level of GDP. While Asian Development Bank suggested that middle income countries spend at least 3.6% of their GDP as they had more established infrastructure available, low income countries needed to spend about 6.3% of their GDP. Evaluating Punjab, Khawar stated that though the total Development Fund for Punjab was Rs. 100B this fiscal year, a requirement of at least 6% GDP investment meant a infrastructure financing gap of Rs 265B over and above the current spending based on the Medium Term Development Framework (MTDF).

Discussing PPP examples in the Punjab and Centre, Khawar argued that there was no institutional support or uniform guidelines for PPP projects. The IPP projects of 1996 formulated under the then Power Policy, apart from kick back scandals provided all sorts of guarantees (furnace oil prices, rate of return) to private parties but did not properly structure risk allocation. The Lahore-Islamabad Motorway generally believed to be a Build-Operate- Transfer (BOT) contract was actually a Build-Transfer (BT) contract as the private party acted as the main financier, leaving the project to the government after completion. The government paid back the private party (DAEWOO) on an agreed schedule by recovering the money through the operator- Frontier Works Organization (FWO). The Lahore-Sheikhupura-Faisalabad highway, widely quoted as a successful example of PPP fell into the BOT mode but the problem was that FWO, which led the consortium of three other private partners was not a private sector firm. This arrangement had been an outcome of direct negotiations thus additionally violating the core PPP principal of transferring risk to the Private Sector.

The Government of Punjab had also done some small PPP projects in the social sector. The Punjab Education Foundation was an example and CARE, an NGO had adopted about one hundred government schools. Similarly Fatima Jinnah Memorial Hospital had been training nurses based on a service contract with the Government. But curiously the Punjab Government itself had been the private sector partner in some PPP projects. The last example Khawar gave was of the composting plant at Mehmood Booti, a PPP project of District Government, Lahore. It treated about 700 tons of waste a day, which amounted to about 10% of Lahore’s waste. The land was provided by the City District Government which had a 10% share in gross profits but the project was not yet profitable. One reason was that contrary to general belief, the composition included higher percentage of inorganic waste, which was not composting friendly.

“…the need for framework, law and policy was not because government could not execute PPP projects without it but because it provided certainty and confidence both to the private party as well as to public sector decision makers …”

The Punjab cabinet had approved a PPP policy in 2009 while the promulgated PPP ordinance had expired and the draft law was being tabled soon. This draft PPP law covered both infrastructure and social sectors as was the international practice while the draft federal law did not specify any sectors. Additionally the Punjab Draft Law covered all three aspects needed for transparency including institutional arrangements, evaluation and contract structure while the Federal Law did not cover evaluation. For adequate regulatory arrangements, the law recommended regulation by contract initially, to be managed later by regulatory authorities. The Punjab PPP policy prescribed the needed institutional arrangements through PPP network which was in the staffing stage and not yet operational. It comprised of a high level PPP decision making steering committee headed by the Chief Secretary, a PPP cell in the Planning and Development Department, PPP nodes in each department and a Risk Management Unit (RMU) in the Finance Department. A Risk Management Policy for fair risk sharing was still being formulated and needed to include a guarantee fund that took responsibility to provide guarantees to the private sector. Government of Punjab had also instituted a rotating Project Development Facility Fund of $1 million further supplemented by $7.5 million from the Asian Development Bank (ADB) for supplementary financial arrangements to support departments in project preparation. Additionally, an Infrastructure Project Financing Facility had been conceived at the federal level to perform a banking role and provide funding for PPP projects at commercial rates. Lastly, full cost recovery had been ensured in the policy.

In conclusion while discussing key issues in the formulation and execution of PPP projects, Khawar argued that the need for framework, law and policy was not because government could not execute PPP projects without it but because it provided certainty and confidence both to the private party as well as to public sector decision makers – the secretaries. In regards to project inception, he argued that the government should always have a priority list of PPP projects (profit oriented versus social sector projects) to generate interest among investors. Additionally the government should put in the time and effort to run feasibilities (project preparation). Although feasibilities took 6-10 months depending on the size of the project, without them, few private parties got interested, negotiation took years and generally the projects did not see the light of day. He argued that inviting private investors by sharing prioritized prepared projects during a foreign trip had much higher changes of success than the process currently followed. In the context of project execution, he raised three points. First, the bid evaluation criteria needed to be objective. Best practices suggested giving pass/fail on the technical proposal and then base financial bidding on a single financial parameter. Second, public disclosure be made a part of the contracts for reasons of transparency as only an open and transparent process would give private sector the confidence in government. Third, a good PPP model was based on fair risk allocation,and full cost recovery (including cost of capital) for the private partner. In case the project could not generate enough funds, the government needed to fill the financing gap through viability gap funding. For project operations, the government’s most important role was of a regulator either through contracts or through regulatory authorities such as Pakistan Telecommunication Authority (PTA), PEMRA, and OGRA

In answering a question regarding why the government was not interested in feasibility studies, Khawar suggested three reasons. Firstly, no uniform guideline was available for departments to ensure a study. Secondly, the sense of urgency among political governments usually forced them to shy away from 6 month – 1 year feasibility. Thirdly, usually departments facing budgetary constraints did not have funding for feasibility and additionally also lacked adequate capacity. But the Project Development Facility should take care of it as departments could now hire a private company for project preparation.Answering a question regarding what could be learnt from the IPP experience, Khawar argued that in the case of IPPs, transaction structuring was poor and there was a lack of transparency but regulation was appropriately managed by NEPRA, which also negotiated the rates. He suggested that Government should do Regulation by Contract rather than setting up independent regulatory authorities for few contracts. Additionally, sufficient capacity should be built within line departments to regulate the contracts but this also required that contract’s performance parameters were well defined.

Answering a question regarding Joint Ventures and Unsolicited Proposals, Khawar argued that joint ventures were a problem because if the government were an equity partner, then it would want to maximize its return to equity thus hampering its regulatory role. He suggested that the international practice of managing unsolicited proposals was the Swiss Challenge Approach. If the proposal was not on the government priority list, then the party was asked to run feasibility. But still, the project was offered to the market for open bidding while allowing the party to match the lowest bid. If the party did not match the lowest bid then the successful bidder was asked to give the party project preparation costs. The key was appropriate compensation for a private partner had done work on the project.