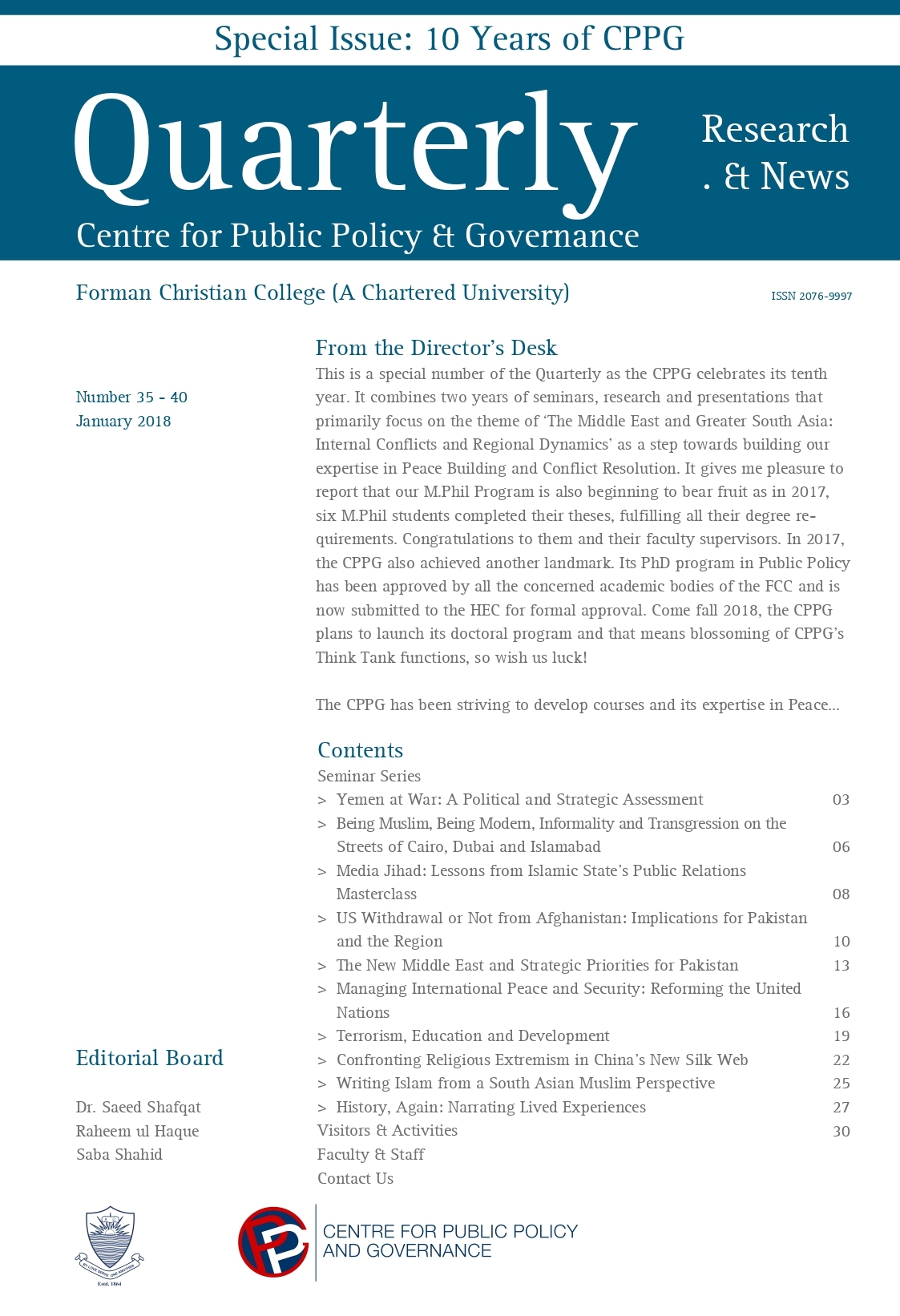 This is a special number of the Quarterly as the CPPG celebrates its tenth year. It combines two years of seminars, research and presentations that primarily focus on the theme of ‘The Middle East and Greater South Asia: Internal Conflicts and Regional Dynamics’ as a step towards building our expertise in Peace Building and Conflict Resolution. It gives me pleasure to report that our M.Phil Program is also beginning to bear fruit as in 2017, six M.Phil students completed their theses, fulfilling all their degree requirements. Congratulations to them and their faculty supervisors. In 2017, the CPPG also achieved another landmark. Its PhD program in Public Policy has been approved by all the concerned academic bodies of the FCC and is now submitted to the HEC for formal approval. Come fall 2018, the CPPG plans to launch its doctoral program and that means blossoming of CPPG’s Think Tank functions, so wish us luck!

The CPPG has been striving to develop courses and its expertise in Peace Building and Conflict Resolution and in that spirit during 2015-16, we organized a series of talks center staging conflicts in the Middle East and the Greater South Asia region. Eminent scholars and policy makers assessed how intractable conflicts impact the socioeconomic development and in what ways domestic and international response is transforming the political dynamics of the region?

Beginning with an overview of the region, Dr. Laurent Bonnefoy examined the making of the conflict in Yemen, while Dr. Chad Haines discussed why economic and spatial elements of urbanity in the South needed to be included in understanding the Arab Spring. Dr. Galloway’s research provided insight into the propaganda strategies of nonstate actors such as the Islamic State of Iraq and al-Sham (ISIS/Daesh) and drew attention to how terrorist organizations function. Mr. Ahmed Rashid discussed the changing dynamics of Pakistan-Afghanistan relations in the light of possible US withdrawal and the potential of reaching peaceful cooperation in tackling militant factions in both countries. Mr. Imran Ahmed Siddiqui, an officer of the Foreign Service of Pakistan, explored the concept of the ‘New Middle East’ with respect to Pakistan’s deep involvement in the socio-economic and political affairs of the Gulf and attempted to articulate possible policy choices to best achieve Pakistan’s strategic goals. Mr. Asim Iftikhar Ahmad, another officer of the Foreign Office discussed the dynamics of decision making in the United Nations and possibilities of reform.

The second part of this issue concentrates on the relationship between terrorist strategies and social progress, and how narratives are critical in stemming violent extremism, projecting a particular world view, and in defining “established history”. Dr. Ummad Mazhar explored the question of why terrorists targeted educational institutions. Dr. Charles Ramsey assessed the phenomenon of religious extremism and its relation to China in the context of the New Silk Web. Dr. Madeline Clement’s presentation provided a meaningful discussion on how Western audiences form opinions of Islamic ideology through the lens of South Asian fiction writers. While Dr. Yasmin Saika discussed the role of history writing in South Asia and the possibility of moving beyond state narratives which are highly political.

Thus, this Special Issue is inter-disciplinary in content and substance. A detailed summary of each of these seminars is provided in this issue of the Quarterly.