Home>Regulatory Framework of the Power Sector

Regulatory Framework of the Power Sector 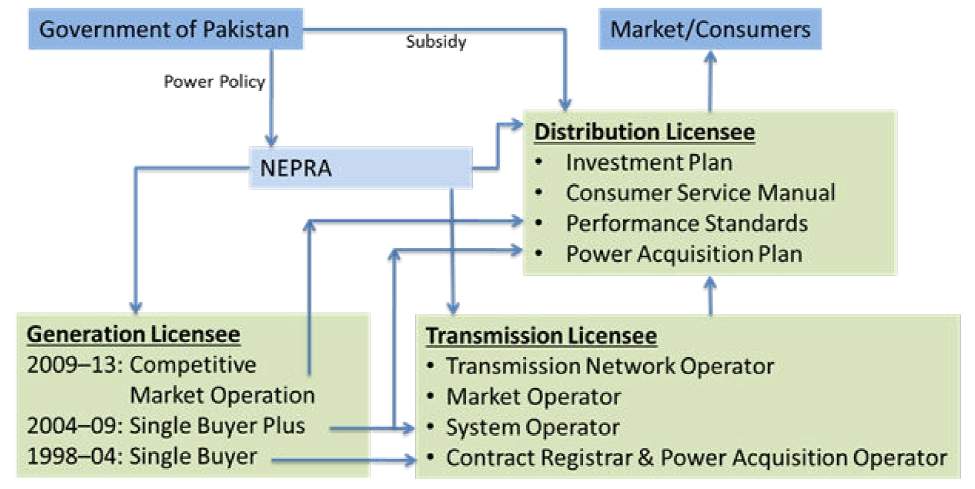 :Mr. Abid Latif Lodhi currently working as the Financial Management Team Lead for Power Distribution Program and earlier for LESCO, NTDC, integrated WAPDA, NEPRA and Multi utility company of Saudi Arabia in various capacities as head of finance and regulations, gave an interview concentrating on the “Regulatory Framework of the Power Sector” to the CPPG Energy team on July 19, 2013.

Lodhi began by framing the context of his presentation suggesting that if energy was viewed as a commodity with a market comprising of buyers and sellers, the focus would automatically shift to understanding the market dynamics and raise a number of questions. Was the market segmented or integrated? What were its needs and whether the commodity supply chain comprising of generation, transmission and distribution systems was fulfilling those needs? Did the market have the propensity to pay for its energy needs and how did market consumers influence the policy through their elected representatives, the policy makers? Was there a regulatory framework for the supply chain and whether the players of the supply chain complied with the respective legal framework?

“…every DISCO should have a different tariff according to its market, performance, power purchase cost, distribution margin and other factors.”

He stated that Pakistan’s power market was regulated under The Regulation of Generation, Transmission and Distribution of Electric Power Act 1997 commonly known as the NEPRA Act 1997. According to this Act, the National Electric Power Regulatory Authority (NEPRA) was established to regulate the power market of the country comprising of three segments – generation, transmission and distribution, each with its own license requirements and service territory. Thus following the unbundling of WAPDA, NEPRA acted as the main market regulator whereby all market issues and participation of various stakeholders including the government was determined according to the legal framework defined by the NEPRA Act 1997.

The transmission segment of the 1997 Act defined the concept of a national grid company through the national grid license with the role of Transmission Network Operator, System Operator, Market Operator and lastly Contract Registrar and Power Acquisition Administrator. This became the National Transmission and Despatch Company (NTDC) whose transmission license envisioned the power market structure, specifically the transmission of power from the generation system to distribution companies according to three phases. The pre 2004 phase was to have a Single Buyer concept, in which only the Central Power Purchasing Authority (CPPA) under NTDC could buy power for the shared power pool and supply it to the DISCOs. The 2004 to 2009 period extended more independence to the DISCOs through the concept of Single Buyer Plus in which CPPA had a smaller role while the DISCOs could begin to make bi-lateral contracts with generators for their energy needs. From 2009 onwards, DISCOs were envisioned as competitive entities, assessing their energy needs and fulfilling them through the power pool or supply contracts with generators. Thus every DISCO would be run as a profitable business only paying for the energy it needed at rates it negotiated. He suggested that the thinking behind these phases was the recognition that DISCOs did not have the capacity to make their own contracts with generators at the time of WAPDA’s unbundling. Thus a transition period was provided whereby CPPA would manage power purchasing till the DISCOs developed their own capacity to make independent contracts. However, DISCOs had yet to develop their capacity to engage in competitive bidding to meet their market demand and still worked within the CPPA Single Buyer pre-2004 framework.

For DISCOs, the distribution license defined by the 1997 Act indicated the required distribution functions. They had a direct link with the market with the responsibility to fulfill the contractual obligations of providing electricity to their customers by getting the supply from power generators. They were to develop both their infrastructure and manpower to make a transition from Single Buyer to competitive bidding. They were to provide a power acquisition request every year indicating their power needs for next year, which NEPRA could use to estimate the overall electricity demand for the country. This required detailed knowledge of their service territory along with devising a master plan for territory expansion inclusive of network expansion and demand increase. DISCOs were to adhere to certain service standards such that the voltage would not fluctuate more than 5%, frequency would remain stable and load shedding criteria be defined in case of shortfall. Further, the consumer service manual provided the customer service protocols on how to deal with complaints, provide support and deal with new customers who needed electricity connections. But the DISCOs had failed to service the market according to the distribution license. The top level management of many DISCOs did not have the capacity to even draft a power acquisition request primarily because they could not forecast the demand for next year. Their performance standards were to be checked annually by NEPRA, which had not done so leading to their lack of development and uneven supply. DISCOs had yet to develop the concept of customer services as no proper training on customer dealings had been provided to the staff while bribes for new meters or wire fixing was common.

Lodhi thus argued that DISCOs did not follow the basic business principles needed to make an organization profitable. Instead, the evidence suggested that these companies were run like a department waiting for their energy supply and orders while doing nothing to fulfill licensed obligations towards their customers. He suggested that little had changed from when they were an Area Board, a department in the vertically integrated WAPDA following orders while planning and policy was done by WAPDA. These unbundled companies were not provided the necessary capacity to run on their own as the staff still lacked the very thinking, attitude and capacity required to run a profitable business. These instead comprised of executers, not planners or leaders who understood the business or the market they were serving. For example, the technical officers were mostly engineers who claimed to have more than 30 years of experience as a distribution engineer. But actually their experience could not be stretched beyond a couple of years because they had only been replicating basic operational tasks such as installation of connections, disconnecting the same, meter reading, bill distribution and installation of low tension wires/poles in most of their jobs as were done in an Area Electricity Board under the unified WAPDA. Whereas all policies and decisions came from WAPDA house. The irony was that the Chief Executive Officer of a billion dollar DISCO was appointed from amongst these engineers who neither had proper management and financial skills nor the necessary equivalent experience.

He disagreed that there was any difference between the various DISCOs even though they had vastly different losses arguing that the difference was only because they catered to different markets. For example, the Lahore market was better than Peshawar in terms of propensity to pay, and law and order leading to a better recovery rate instead of a difference between LESCO and PESCO staff. Thus, a management swap between LESCO and PESCO would not make any difference in the workings of respective companies.

“From 2009 onwards, DISCOs were envisioned as competitive entities, assessing their energy needs and fulfilling them through the power pool or supply contracts with generators.”

Further discussing the legal framework, it was stated that WAPDA was formed under the WAPDA Act 1958, whereas for the regulation of power related functions, guidance was sought from the Electricity Act of 1910 made by the British. Under the Constitution of Pakistan, 1973, electricity was in the concurrent list (before the 18th amendment) and thus both the federation and provinces could make laws regarding electricity. Thereafter the NEPRA Act 1997 was enacted by the federal Government. He argued that after the 18th amendment, electricity was purely in the federal domain. However, a constitutional guarantee under article 157 of the constitution allowed provinces to generate their own electricity (there is no 50 MW cap), procure power from the federation, set up their own transmission network and determine their own tariff though there existed some ambiguity in the selling of power. But this constitutional clause had yet to be used by any of the provinces.

Further discussing decentralization, he stated that actually every DISCO should have a different tariff according to its market, performance, power purchase cost, distribution margin and other factors. But the tariff only became applicable after the Federal Government’s notification of NEPRA’s determined tariff. When the Federal Government observed huge tariff differences between provinces, it instead notified an average tariff applicable to all DISCOs disregarding the NEPRA determined tariff. Given that the notified tariff was much lower than the actual tariff, the government paid the difference to the DISCOs as a subsidy. Thus Rs. 8.87 per unit was passed to the consumer while the actual cost was Rs. 14.66 leading to a hefty subsidy of Rs. 5.79 per unit. Additionally, the DISCOs never fully recovered the dues owing to about 20-30% theft or technical losses while keeping whatever subsidy they received from the government. Thus DISCOs could not pay the due share to NTDC, which instead took out its own margin and paid the rest to the generators, who were unable to meet their payments to the oil and gas companies or interest on their loans. The generation companies either took out more loans to keep the generation running or limited generation waiting for the state to pay off its existing debt. In brief, Circular Debt was a consequence of the inefficiencies of the power sector and delays in determination of tariff of distribution companies by NEPRA. Reforms in the sector had not been well thought out or followed properly. Either the legal framework needed to be followed or changed as it did not currently address the issues of the sector. An important reason for this was the lack of institutional memory in NEPRA as members who had originally designed the legal framework had retired while the new leadership had no understanding of the framework’s provisions. He argued for professional management and technical staffing stating that this issue was at the very heart of state mismanagement as most institutions were run by a generalist bureaucracy with regular transfers leading to a lack of institutional memory and proper planning.

“These unbundled companies were not provided the necessary capacity to run on their own as the staff still lacked the very thinking, attitude and capacity required to run a profitable business.”