Home>Retaliation or Aggression? Gaza as a recent milestone in the Palestine question

Retaliation or Aggression? Gaza as a recent milestone in the Palestine question 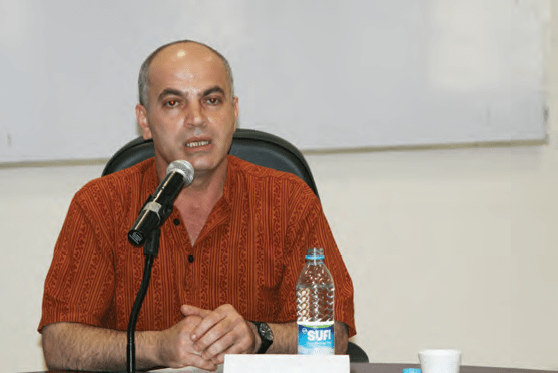 : Dr. Magid Shihade, a Palestinian scholar currently teaching at LUMS and author of the forthcoming book What a Soccer Game Reveals: Sectarianism, Violence and Modernity in the Israeli State was invited to deliver a talk on “Retaliation or Aggression? Gaza as a recent milestone in the Palestine question” at the Centre for Public Policy and Governance on March 18, 2010.

Shihade opened his remarks by stating that although Palestinians were generally known to reside in the West Bank, Gaza or abroad, still there were 1 million Palestinians living in Israel and he himself was a Christian Palestinian and an Israeli citizen. But despite being a citizen of Israel, like other Palestinians he also faced discrimination on many levels.

Taking the invasion of Gaza in 2008-2009 as a point of reference to understand the Arab-Israeli equation, he argued that while the media had reported that the Israeli attack was to protect its sovereignty and civilians against the attacks from Gaza by Hamas and other militant groups. However, the reality was that six months prior to the Israeli invasion, Hamas had not carried out any attacks and no Israeli civilian deaths had occurred. This was because a year prior to the attacks, Hamas and Israel had signed a ceasefire agreement according to which Hamas had to prevent attacks on Israel and in return Israel agreed to ease the blockade around Gaza. Hamas had kept its side of the bargain as attested by the Israeli intelligence’s assessment that Hamas was interested in keeping the ceasefire. Thus to gauge and further explore the politics and the degree of truth in international media news reports, Shihade sketched out three frameworks; propaganda, racism and projection.

He stated that the Israeli propaganda following the Gaza attack projecting it as mere retaliation was exposed by the United Nations investigation teams and international human rights specialists from Europe and other regions of the world. He further explained the Israeli spokesperson’s argument claiming that Israeli attacks were carried out in retaliation of 13 Israeli civilians killed by Hamas as a racist understanding of the value of life whereby killing of hundreds of Gazans was justified in the name of 13 Israeli deaths. Some Israeli officials publicly propagated this hate ideology to justify the killing of Arabs while an Israeli Rabbi who was also an elected representative had even justified the killing of Palestinians based on divine command. Furthermore, the Israeli foreign minister openly propagated a policy of transfer which in simple terms was to kick Palestinians out of their land. The third framework was the pathology of projection, which was a part of modern colonial history. It included narratives which directed the blame for violence on the natives. Another projection was that Palestinians taught hatred for Jews and encouraged violence against them in their textbooks. Such narratives of violent natives and their inherent cultural violence comprised the Israeli response and explanations for attacks even when the massacre was committed by Israel.

“…a Jewish person belonging to any country in the world had the right to automatic citizenship of Israel while the Palestinians who had inhabited the land for hundreds of years did not have the right of return.”

Providing a historical overview of the discriminatory nature of the Israeli State, Shihade highlighted the use of legal terminologies and mechanisms to obfuscate the meaning of reality. In 1948 when Israel occupied 78% of Palestine, legal frameworks were created to appropriate the land of the people who had left to become refugees. The “Ministry for the protection of absentees’ land” while  protecting the land in name, however, was used to establish Jewish settlements. Elaborating the legal frameworks, he pointed out two parallel laws which were framed to appropriate the land of Palestinians who had remained in the Israeli State. First, certain agricultural areas were declared part of “military zones” where no civilians were allowed and second, another law stated that if farmers did not use their agricultural land for over a year, it would be confiscated by the State. Further, a terminology of “present absentees” was applied to the Palestinians who remained in Israel but could not provide legal proof of citizenship. In 1948, the Israeli State demanded legal proof of citizenship from Palestinian residents of Israel. The process involved obtaining a certificate either from a local village council or the military government. Since many villages did not have local councils and not a single villager was given certification by the military government, people who were physically present became legally absent and without citizenship. More recently, Israel had tried to search for the possibilities of remains of a synagogue underneath the Aqsa Mosque, but excavation that could damage another site was prohibited under international law. Thus to legalize it, a plan for the “Preservation of holy sites” including approximately a 100 sites was proposed and since the word preservation had positive connotations, the act was legalized.

He then proceeded to provide an overview of the contemporary situation by articulating the main hurdles to a sustainable peace process. He criticized the expansion of settlements, what Israel called “housing” instead of settlement or colonies, alongside peace talks arguing that the State could not blame it on extremist and unmanageable settlers because it provided them protection and facilitation through the Israeli military. Discussing the right of return, he implored how a Jewish person belonging to any country in the world had the right to automatic citizenship of Israel while the Palestinians who had inhabited the land for hundreds of years did not have the right of return. More importantly, any Jewish person from another country could get property rights in Israel while Palestinians who had been living there for years were devoid of the same rights. This was legalized through an international Jewish organization, “The Jewish National Fund”, which owned 80% of the land in Israel and leased it out to the State with the condition that the State could not sell this land to non-Jewish persons.

“…as Israel continued to occupy more and more Palestinian land, there was a greater chance of a single apartheid State”

Dwelling on possible solutions to the conflict through a single or two separate States, he said that the Palestinian desire was to lead a dignified life with recognition and equality of rights. But the possibility of co-existence with the Jewish community on the basis of equality of rights and human life did not exist for the Palestinians as recent surveys conducted in Israel showed that 78% of Israelis did not want equality with Arabs and 75% of Jewish Israelis supported the concept of “transfer” i.e. forcing Israeli Palestinians to leave Israel. He thus argued that as Israel continued to occupy more and more Palestinian land, there was a greater chance of a single apartheid State. Given such an attitude and policies, he observed that the possibility of another intifada was always present as the Palestinians could not be subjugated to limited mobility, education, trade, employment and economic activity for an indefinite period.

Further, analyzing the international support for Israel, he articulated that the Christian-Zionist movement had increased its political and economic influence over the last 30 years as some fundamentalist Christian groups with political influence in the US wanted to preserve the land of Israel for Jews believing that Jesus would only return to the land of the Jews at the end of the world. He argued that Israel’s continuation of discriminatory policies was only possible with the support of the US Government as without it, Israel would be forced to amend its policies.Furthermore, the US would only withdraw its support when it becomes too costly for it to support Israel.

In conclusion, Shihade suggested that most countries used propaganda to justify their policies while racism and planned projection were also common and universally used tools. The discourse of racism had been well-managed over the past 100 years and had even infiltrated the minds of objects/victims in the form of “colonization of the mind” and “native orientalism” where Orientals themselves repeated an oriental narrative about their own culture and history. He argued that though the citizens of Palestine had not been successful in liberating themselves, still they had made the occupation extremely difficult and costly through their resistance. He further clarified that the opposition and resistance to Israeli policies did not translate into hatred for the Jews. 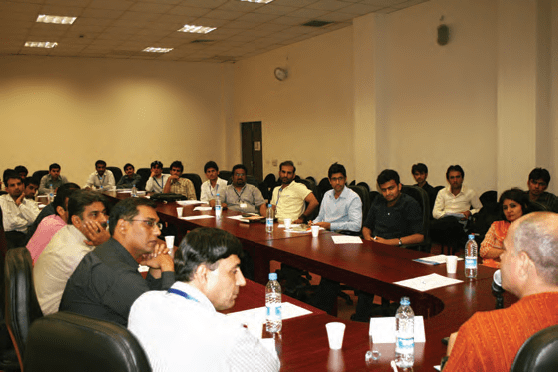 Responding to a question whether negotiations with Israel would resolve the conflict and if violent means to counter occupation were justified, he stated that evidence showed that negotiation or recognition of the State of Israel by Palestinians had failed to bring any positive solution to the conflict as the current international consensus accepted the occupation but condemned resistance to it as violence and terrorism. Such perceptions needed to be challenged as Palestinians were resisting, they were not violent. The only way liberation could come about was through constant public pressure from abroad and persistent rejection of the dehumanizing and racist discourse where Palestinian resistance was seen as violence and Israeli attacks were seen as retaliation.