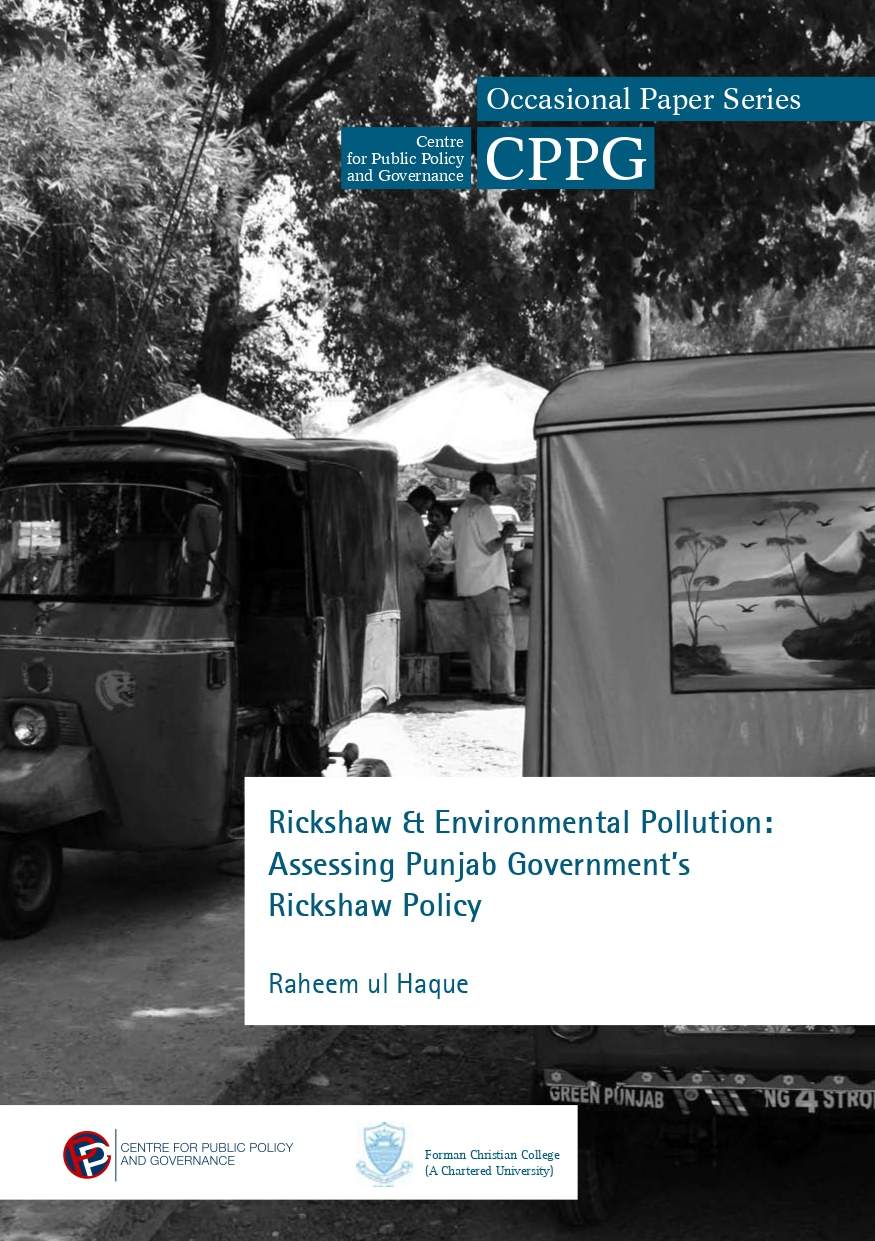 The report focuses on two critical issues, first to what degree Rickshaws are a problem in causing noise and environmental pollution in the city of Lahore. Second, it ventures to explain the process of policy formulation of converting 2 stroke engine Rickshaws to 4 stroke engine CNG Rickshaws. Was the process well conceived and thought through? Did it take into account the economic feasibility of the project? Were the stakeholders consulted? Were the President’s Rozgar Scheme and Chief Minister Green Punjab Scheme simply tools of political expediency or aimed at developing an environment friendly transport policy? Examining and analyzing such questions the report identifies the inadequacies and gaps in the Rickshaw conversion policy, lack of coordination between Trans- port and Environment Departments. It observes that Courts can act for Public Good and give direction on matters of policy but policy formulation is more com- plex and involving, and demands transparent and inclusive policy process.

The report painstakingly notes that concerns about noise pollution, environmental degradation or regulation of movement of Rickshaws either within the city or smaller towns is not adequately and effectively monitored by the Punjab government. It makes specific recommendations that policy makers in the Punjab government may find useful and informative.

The report shows that there are stake holders, who have both competing and at times common interests, yet they are unable to evolve consensus on how to influence the policy of the government. In the absence of a credible and effective public transport network in the city of Lahore, Rickshaw provides low cost taxi service to the city population of 8 million. Rickshaw is a vehicle of demand and public need and thus it is important to make it environment friendly.

It is equally important to note that where as there are estimated 80,000 Rickshaws plying in the city of Lahore, it is mind boggling that there are only three inspectors to ensure the inspection of these rickshaws. The Rickshaw drivers do have a union but it is ineffective, an enterprise which is largely run by private individuals, who complain that police corruption and rise in gasoline / gas price, is making it difficult for them to make ends meet. The report raises concerns about the economic feasibility of 4 stroke CNG rickshaws – a contributory factor that hinders the conversion of 2 stroke to 4 stroke.

The report found that the stake holders’ input in policy making was minimal – the driver’s union, mechanics, Kharadia, dealers and manufacturers. Therefore, it suggests that for an effective and implementable policy, which has some ownership, stake holders involvement must be part of the policy process.

The report recommends an integrated product quality approach to make a trans- formation from 2 strokes to 4 stroke Rickshaws. It makes a strong and persuasive case to the Punjab government to adopt a “comprehensive urban transport policy, which includes regulations for all public service as well as personal vehicles.” To improve citizen mobility and to decrease environmental pollution an efficient public transport system is urgently needed in Punjab.

The Centre for Pubic Policy and Governance is keen to contribute towards a more deliberative, transparent and participative policy process and it is in this spirit that it aims to produce Occasional Policy Papers, and this report is first of the series. We hope the policy makers, media, civil society advocates and citizens find it informative and its recommendations as actionable policy choices. The CPPG encourages its readers to give us comments and critical feedback to further improve our efforts.