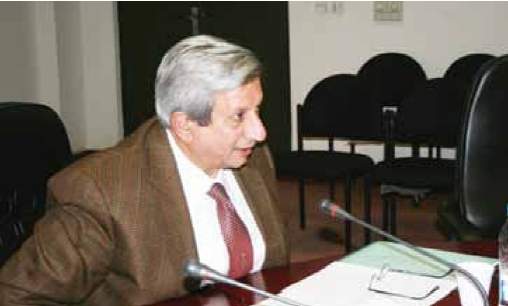 Ahmad opened his remarks by stating that energy was the life line of economic and social development of a nation. But in Pakistan’s case, energy sector suffered from poor policy, mismanagement and non-implementation of projects leading Pakistan to be ranked in the acute energy starved economies with per capita energy consumption among the lowest group in the world at 15 mbtu as compared to 104 for Malaysia, 54 for China and 21 for Indonesia. He stated that Pakistan should aim to double its energy consumption per capita to 30 mbtu in the next twenty years. But its current consumption pattern also required changes as in comparison to Korea whose Industrial sector used 46% electricity as compared to 26% for Domestic, the usage of electricity was opposite in Pakistan leading to high usage for a sector which did not produce GDP. Additionally in gas consumption, the General Industries got about 26.1% which was not enough while the Transport CNG sector got 7.7%. Based only on pipeline quality gas, CNG share actually constituted 13% and was highly subsidized at 1/3 the cost of gasoline, which only benefitted the rich and upper middle classes.

He then proceeded to outline the impact of energy crises stating that the availability of power for the industrial sector was seriously constrained preventing the production of value goods and services. The job losses were in millions, loss of exports was about $2B and the total GDP loss stood at Rs. 300B. But the current government had not addressed the energy issue. No major oil, gas or power generation project had been formulated in the past four years for completion in the 2012-15 period while the accumulated Circular Debt of Rs. 651B in the last five years had further aggravated the problem. Thus the current electric power shortage of 4,000-6,000 MW and the natural gas shortage of 800 mmcfd in the summer and 1500 mmcfd in the winter were expected to rise.

He then delineated eight distinct causes of the current energy crisis. One, a lack of integrated energy planning as the Petroleum Institute of Pakistan (PIP) had showed a need for revised projections for planners of power sector and oil and gas industry. Demand projections of gas compromising 49% of the primary energy mix assumed that transnational pipelines would be built without consideration of import modalities and costs. He instead thought that the likelihood of implementation of transnational pipeline projects on time was minimal because of technical and political reasons. Similarly, demand projection of 22.63 million tons of oil equivalent (MTOE) oil imports approximately costing $30B was unaffordable and thus unattainable. The demand projection based on 6.5% GDP growth rate was also unrealistic as no emphasis was given to the supply side, thus underplaying gap coverage through coal, hydel, nuclear and the alternate energy sources. Two, the imbalanced primary energy mix with 49% dependence on gas and 32% on oil, POL and LPG was unsustainable. The projected natural gas dependence of 48% in 2020 was unattainable because of the continuing delay of transnational pipelines (TNPs) and Liquid Natural Gas (LNG) import projects. Of the 32% oil, about 82% was imported. The rising cost of oil currently at $110 per barrel made Pakistan’s 41% oil based thermal generation unsustainable and was a major reason behind the existing energy sector debt of $7B. The fuel oil import bill was $12B in 2010-2011 and was projected to rise to $30B (oil at $100 a barrel) by 2015 and $50B in 2020. Instead, Pakistan’s electricity generation from coal was 0.1% compared to 76% for China, 68% for India, 40% for Germany and 51% for USA.

Three, non-utilization of vast indigenous primary energy resources such as the Thar coal mine which was the world’s single largest contiguous coal mine supporting Pakistan’s claim of 16% of the world’s total coal reserves. It was equivalent to 480B barrels of oil worth $25 trillion which was more than the combined Iran-Iraq oil reserves to date. However, it remained unutilized due to flawed policy and ineffective development strategies. Four, theft, losses, mismanagement and corruption were significant issues with theft alone equaling Rs. 100B a year for the Power sector and Rs. 25B for gas utilities. Additionally, nonpayment by government organizations amounted to another Rs. 85 billion a year. Five, lack of effective project structuring, planning, financing and non implementation of indentified viable projects. Though a few projects had been much talked about but it was unlikely that they would actually happen because their project development had not been done correctly. Six, mismanagement and political interference were well documented and covered. Seven, a disorientated regulatory framework as both Oil and Gas Regulatory Authority (OGRA) and National Electric Power Regulatory Authority (NEPRA) didn’t follow their respective objectives or had the needed organizational independence. While they were supposed to be under the Cabinet Division, in reality they were controlled by the Ministries of Water & Power, and the Ministry of Petroleum. Eight, the non-implementation of Pakistan’s first Integrated Energy Plan 2005-30 which was prepared by the Energy Plan Committee comprising of 30 stakeholders in December 2004, and was based on projected GDP growth rate of 6.5%. According to the plan, a clear road map had been defined to fill the gap between demand and indigenous supplies through gas imports and oil. He argued that had this plan been followed, there would be little or no gas or power load shedding today.

Ahmad considered Circular Debt to be the most crucial issue at hand. Explaining debt management, he provided the 2009 example when Rs. 301B was transferred to Power Holding Company Limited (PHCL) under the Ministry of Water & Power. While this cleared the balance sheets of power sector companies, the repayment plan required annual payments of Rs. 50B from the budget for the next 15 years. However, an additional debt of Rs. 180B had already been accrued and was currently parked in the oil and gas sector entities PSO, OGDC, SSGC, SNGPL, PPL and the like, while an additional Rs. 163B was parked with the IPPs under their own credit lines due to non-payment by PEPCO/Central Power Purchasing Agency (CPPA). He argued that taking money from one deep pocket and putting it in another while both were owned by the government did not resolve the Circular Debt issue and instead the following six fundamental issues needed to be addressed:

one, higher overall generation costs as indigenous resources had not been developed, and due to the lack of gas, a number of generation plants had to use more expensive fuels; two, irrational tariff structure resulting in a tariff gap of about Rs. 2/kwh leading to a monthly deficit of Rs. 20B; three, massive losses amounting to 25% in the WAPDA/PEPCO system with theft equaling Rs. 100B per year due to political patronage and mafias; four, non-payment by Karachi Electric Supply Company (KESC) to Sui Southern Gas Company (SSGC) which had now reached Rs. 46B and to PEPCO/CPPA of Rs. 50B; five, non-payment of power by federal and provincial governments amounting to Rs. 10B a year and by the private sector another Rs. 10B; six, non-payment of power used by FATA, Khyber Pakhtoonkhwa and Baluchistan of Rs. 10B each year, Sindh of Rs. 15B, and Azad Jammu and Kashmir of Rs. 5B amounting to a total nonpayment of Rs. 50B a year. 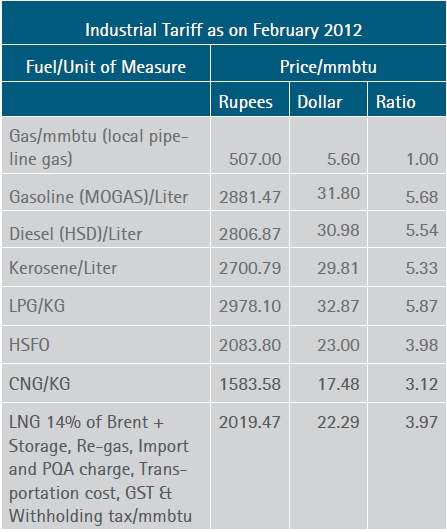 To stop the above listed perpetual bleeding, he suggested strong political will and coercive measures as part of a multi-pronged strategy to address and resolve the fundamental issue rather than repeated power tariff increases dictated by the World Bank and IMF.

Discussing future outlook, Ahmad disagreed with the projections of PIP arguing that the numbers on gas and oil imports did not take into account fulfillment modalities requiring an alternative plan. For example, the planned completion of infrastructure especially transnational pipelines was unlikely before 2020. Similarly, the affordability of projected cost of 5.2 bcfd mmcfd gas imports by 2022 estimated at $100B a year was questionable.

Concluding, he articulated that the solution to Pakistan’s energy crisis centered on a revised and balanced primary energy mix which required a shift to power generation plan based on available indigenous primary energy including Thar coal and hydel. A fast track development of alternate energy including wind, solar and biomass was also needed. Further proposing an energy gap coverage strategy for 2030, Ahmad asserted a complete implementation of hydel, coal, nuclear and alternate energy projects through a phased program till 2030: firstly, Thar coal utilization through gasification and co-production plants could produce 25,000 MW of electricity increasing its share to 25% of the power generation mix and 30% of the primary energy mix; secondly, hydroelectricity could produce 32,200 MW of electricity increasing its share from 11% to 20% by setting up small and medium hydel units on canals and Run of the River plants of up to 8,000 MW capacity, and four large hydel power dams with a capacity of 17,600 MW (Bunji – 5,400 MW, Dasu – 3,800 MW, Pattan – 3,800 MW, Bhasha – 4,600 MW, Kalabagh – 3,800 MW); thirdly, alternate energy projects should be facilitated with the aim of increasing its share to 5% of the primary energy mix; fourthly, the share of nuclear energy could be increased to 7% as Pakistan had the required technology, knowledge and fuel for it. His final remarks propounded the need for a vigorous effort by engineers and professionals to formulate and implement a comprehensive National Energy Plan to ensure energy sufficiency, sustainability and sovereignty for Pakistan in the 21st century. 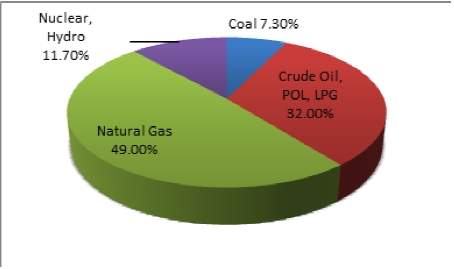 The talk evoked a number of questions from the participants. Responding to a question regarding the responsibility of engineers and professionals in the energy crisis, Ahmad argued that more than technical, it was a political issue. He emphatically put the onus on political interference and its requirements of commissions and kickbacks as the main hindrance in resolving the energy crises stating that if the state were to do nothing but rely on competent professionals, the job could be done.

“…need strong political will and coercive measures as part of a multi-pronged strategy to address and resolve the fundamental issue rather than repeated power tariff increases dictated by the World Bank and IMF.”

In response to a question regarding the policy and institutional framework for improved planning and project development, Ahmad argued that while demand side forecasting was stressed, the supply side focusing on energy resources provision was conspicuously absent from planning in Pakistan. He thus proposed a national energy authority to ensure centralized, coordinated and integrated planning. Discussing power sector reforms and PEPCO, he agreed with the reform structure but stated that it was not implemented correctly. PEPCO was strictly a management company for integrated planning and should stick to that role. 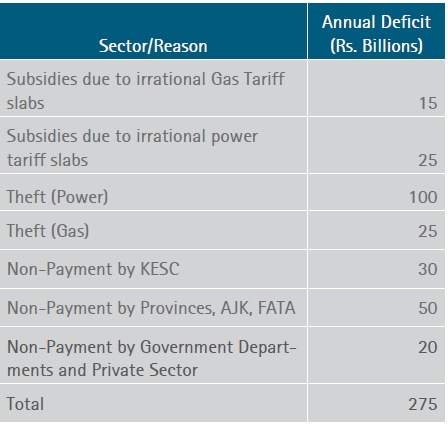 Answering a question regarding reasons for non-utilization of coal reserves, Ahmad stated that it was a technical issue owing to a dearth of mining engineering knowledge in Pakistan and in depth understanding of the resource.

Dr. Farid Malik, Professor of Management at Forman Christian College and a mining engineer by qualification pointed to mining’s provincial status as a reason for the lack of knowledge. Further exploring the subject, Malik suggested that three proposals were tabled for Thar coal in 2009: underground coal gasification, Engro’s coal mining project and lastly a test mine. While all these proposals were accepted by the planning commission, investment was directed only to the underground coal gasification project which claimed gas production in a short 6 month period. However this project had yet to borne fruit. 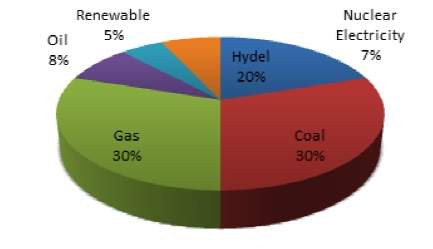