The Political Economy of Indus Waters 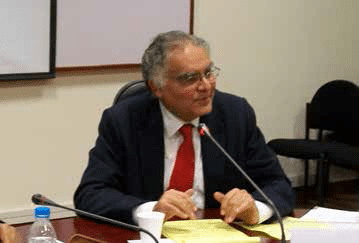 Dr. Akmal Hussain, Distinguished Professor of Economics at Forman Christian College and Member Board of Governors, South Asia Centre for Policy Studies was invited to deliver a talk on “The Political Economy of Indus Waters” at the Centre for Public Policy and Governance on 21st February, 2013.

Dr. Hussain began his talk by highlighting that Pakistan was in a water stress situation. Over the years, the country had shifted from being a water surplus country to a water scarce country. The rate of decline in per capita water availability had accelerated after 1999, primarily due to reduced rainfall in Himachal Pardesh, and Jammu and Kashmir. The per capita water availability of the Indus Basin had declined from 5,100 cubic meters per person in 1962 to only 1,300 cubic meters per person in the year 2011. As the international estimate of minimum water requirement per person per year was 1,700 cubic meters, Pakistan’s water availability was alarmingly low in comparison. Furthermore, existing projections suggested that this water scarcity would intensify over time. The government and people must recognize that we were now in a serious water stress situation.

“The government and people must recognize that we were now in a serious water stress situation.”

He then proceeded to elaborate on important features of the gradual natural and climactic shifts, their transformations and implications. First, the river flows in Pakistan had declined across the 1960 to 2011 period, by apapproximately 16%, while the total annual river flow of the Indus basin had declined from 119 acre feet to 102 acre feet in the same period. Thus, per capita water availability had declined not merely due to population rise but also in absolute river water flows. Second, current data showed that monsoons had shifted from the West of the country to the East, in line with Climate Change experts’ predictions for South Asia that location and volume of rainfall would shift due to Global Warming. Since the rivers as well as most of the cultivated acreage were located in the West of the country, it would have major implications on the stability of agricultural production. Third, the scale and magnitude of glacial melt in the Himalayas was significantly higher than the average glacial melt in other parts of the world. In Pakistan historically, the glacial melt had been the highest in the month of August, which was in sync with periodic crop water requirements. However, the recent change in glacial melting pattern had resulted in greater melt during earlier months, and lesser melt in August resulting in the dearth of water for agricultural needs.

He thus argued that increased variability and location change of monsoons, and shift in the temporal pattern of glacial melt had collectively resulted in increased inconsistency and instability in agricultural production, which was consistent with the data on Climate Change. The frequency of bad harvests had more than doubled over the past decade and productivity of the seeds had also been adversely effected. An implication for society was increased vulnerability of the marginal sections, as a bad harvest for marginal agriculture producers meant that they would become buyers of food and consequently indebted. Thus, these increased fluctuations in agricultural output had created a structural phenomenon of increased poverty.

Discussing water utilization in Pakistan, Hussain identified problems of low irrigation efficiency and low water use efficiency. Elaborating the issue of low irrigation efficiency of 33%, he explained that out of 100 million acre feet of river water, only 33 million acre feet reached the farm gate while the rest was lost. A similarly large proportion of water got wasted from farm gate to the root zone of the crop. Pakistan’s water-use efficiency was also among the lowest in the world at $3.34 of output per unit of water used. Pakistan was producing low value, water-use intensive crops such as sugar cane and rice.

He then discussed implications of water scarcity for domestic policy and inter-state relations, and argued that since the Indus basin was shared by two countries and many provinces, a rational approach would be to cooperate and innovate to manage this crisis. He suggested three major policy options and remedial measures. First, greater irrigation and application efficiency through lining canals and planting trees along the canals; brick or concrete lining of water courses; using laser leveling technology to reduce water wastage on the farm; creating water channels on the farm; using drip irrigation to transport calibrated water precisely to the root zone of the crops. Second, to improve water use efficiency (output produced per water unit), it was necessary to change cropping patterns and devote a larger amount of crop acreage to high value added crops. For example, tunnel farming for vegetables could massively increase output value. Third, Pakistan’s water allocation strategy needed to be rethought as it remained unchanged from what Britain was using in the 19th century leading to surplus water in some areas while leaving others water deficient. Estimation of water requirements for every command area on a zone wise basis needed to be carried out to achieve greater allocative efficiency in water distribution.

Discussing international dimension of the issue, he stated that Indus waters were a shared water resource and thus required joint water resource management. Indus Basin Treaty, the longest lasting and the biggest water management document of the world also suggested sharing of information and cooperation in water management. There was thus a need for reliable data on river flows on a daily and hourly basis, for which technology was available. He argued that this technology be adopted to improve cooperation, as the allegation that India was stealing our water, would either be proven or disproven. Further, both countries should pool resources for flood and drought forecasting, managing water waste and tree plantation for flood prevention. Joint water shed management and planting trees in catchment areas could prevent flash floods by slowing down water flow in catchment areas as well as reduce siltation of dams.

Lastly discussing food security, he sounded an alarm bell stating that Pakistan’s vulnerability to the devastation that Climate Change could cause to society and economy was greater than anywhere else in the world. An Intergovernmental Panel for Climate Change (lGPCC) report had listed South Asia, the most vulnerable region of the world as its agriculture was critically dependent on timely monsoons. 70% of Pakistan’s rural population was food insecure, lived on the margins, and thus a bad harvest would result in rising poverty. Another Global Warming induced consequence was reduced seed productivity due to rising temperatures. Further, the presence of industrial waste, lead and arsenic in the Pakistani and Indian rivers, and polluted water percolating ground water, was creating health hazards by contaminating food.

In conclusion, he stated that the government needed to recognize that Pakistan had shifted from water surplus to a water scarce situation. Given this water crisis, it needed to undertake policies that would improve our irrigation, water use, allocation and distributive efficiencies. Additionally, Pakistan needed to arrive at a rational arrangement with India for the measurement of water flows, on digitizing rivers, improving soil chemistry, waste water management, and on how to acquire and develop heat resistant varieties of food grains. Cooperation was needed to survive, and institutional mechanisms both within and between countries needed to be a part of this strategy of survival.

A question and answer session followed. In answering a set of questions regarding political aspects of water sharing including interprovincial sharing of water, Indian willingness to engage with Pakistan for water management and lastly the role of Indus River System Authority (IRSA), he proposed multilevel policy options. First, the Council of Common Interest (CCI) must be cognizant of the fact that IRSA had failed to achieve its goals and it was CCI’s responsibility to develop a consensus on inter-provincial cooperation with the involvement of provincial Planning and Development departments. Second, broader sections of society from each province needed to be encouraged to join the debate, and large civil society organizations must be linked with provincial governments to come up with alternative consensus on water sharing, so that better options could be explored and discussed in the CCI. Finally, academics, economists, civil engineers, and scholars had to be engaged in the policy making process, in an institutionalized fashion. This implied building institutions for peaceful inter-provincial management as opposed to conflict. The same was needed to effectively negotiate and engage with India on water management issues.

“Cooperation was needed to survive, and institutional mechanisms both within and between countries was essential to be a part of this strategy of survival.”

In response to a question concerning how to create incentives and mechanisms to encourage judicious use of water by individuals, he brought in economic principles of making rational choices under conditions of scarcity to argue for effective pricing to ensure optimal consumption. Pricing water could change people’s behavior and reduce wastage of water. Installation of water meters to accurately measure water consumption and pricing the resource accordingly would ensure efficient utilization.

Responding to a question about governance in the US versus Pakistan, Hussain stated that in Pakistan, there was low level of acceptability regarding the role of academia in policy and governance. The government was mainly interested in quick fixes and short-term solutions rather than implementing long-term and evidence based strategies as suggested by academics.