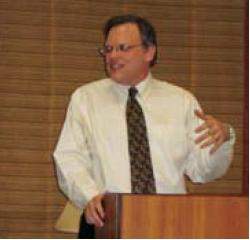 : Dr. Robert A. Johnson presented his paper Thinking outside the Ballot Box: Democracy’s True Meaning on the 18th of March, 2008 at the Faculty Seminar Series, Centre for Public Policy and Governance (CPPG).

As suggested by its title Dr. Johnson argued for a substantive meaning of democracy ‘an environment which is oriented to fostering the flourishing of its citizens’. It thus critiques the procedural meaning of democracy – electoral democracy as misplaced and lacking essence. The speaker substantiates his argument by referring to the case of Hitler who came to power through elections. Similarly the Srilankan electoral process was an important factor in starting the civil war between the minority Tamils and majority Sinhalese. He thus argues that organizations who concentrate on elections (even free & fair) while discussing democracy miss the point because human flourishing rather than being a by-product of electoral democracy is actually its basis.

Dr. Johnson provided a historical overview and traced the roots of democracy in the European Enlightenment and subsequent appearance of the individual in history. It is Enlightenment’s role in propogating the equality of man and instituting reason to evaluate claims of privilege that rejects oligarchic, monarchic, theocratic and dictatorial power as these systems fail to defend and promote human dignity. He sees this very defense of individual human dignity in the American constitution through ‘the pursuit of happiness’ as the differentiating factor in the sustenance of American democracy for two hundred years as compared to the French and other European democracies. Thus he argues against the Welfare State because of its interference with and patronizing policy towards the individual leading to provision of privileges rather than the promotion of rights to flourish. This makes the welfare state more susceptible to corruption and despotism by creating a passive citizenry.

While summing up his argument Dr. Johnson critiques the discourse of the main defenders of democracy including Human Rights Watch and Freedom House, who in the author’s analysis separate the concepts of human rights from democracy by concentrating more on procedural aspects of electoral democracy. Dr. Johnson argues for bringing the idea and the essence of democracy to the fore rather than equating it with elections. He puts this responsibility on the Academy and Media because of their role in educating society and forming public opinion stating that it is ‘the basic building blocks of information with which they (human beings) construct their world and with which democracy is built’. He encourages the academy to keep an oppositional relationship (sometimes loyal and sometimes confrontational) with the legislative chamber to keep the real idea of democracy ‘fostering the flourishing of the citizens’ alive by always presenting independent thought from the perspective of the people. 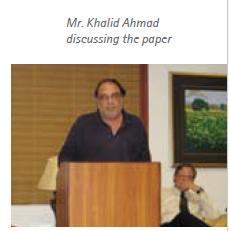 As a discussant, Mr Khalid Ahmed agreed with Dr. Johnson’s thesis on the needed building blocks of democracy and nurturing of the individual as its objective. Analyzing contemporary Pakistan, he argued that the ‘ideological’ nature of the Pakistani state was the biggest hindrance to democracy. He argued that while Europe had scrutinized the city state of Athens even as it borrowed from it, the same had not happened in Muslim societies who extrapolated from the direct democracy of the Medinan State without critiquing or contextualizing it based on time, size and culture. Thus an entire corpus of Islamic laws was enforced without any scrutiny of reason even though there was nothing in Islam that disallowed scrutiny of reason. This had also lead to the ouster of culture by religion as the means of association within society. Thus restricting ones identity and making it harder for individual citizens to relate with other religious and cultural groups. He highlighted two processes in which both civil society and the state were complicit. One was to focus on the identity of an unwanted community and deny them their citizen rights, the other was to define oneself so strictly that diverse groups around one fell off. Thus a central identity based on ‘state ideology’ led to further lack of tolerance in a democracy.

He argued that to remove division in society, an individual should be able to cultivate multiple identities as flourishing of citizens was only possible if citizens had the freedom to acquire knowledge autonomously without any restrictions. The successful states had managed it by adopting economics and primarily the free market model pushing ideology back as their basis for policy making.

A couple of participants highlighted the importance of procedural democracy (free & fair elections) given that the fostering atmosphere argued by Dr. Johnson would not be created on its own and required a collaborative exercise in highlighting the collective wisdom of the people.