Dr. Taha started his presentation by describing the importance of Karachi both for the province of Sindh and for Pakistan. It is the largest city with a population of 9.8 million according to the 1998 Census but today its population is estimated to be around 20 million. Until recently it was the only trading port of the country. Karachi plays a pivotal role in the country’s economy; the city contributes 25% to federal revenues, 15% to the GDP, holds 50% of the country’s bank deposits and 72% of all issued capital. It employs 71.6% of total employed labor force of Sindh and contains 32% of the total industrial assets of the country. Karachi manifests the multicultural and pluralist spirit of Pakistan; it is cosmopolitan and melting pot of Pakistani ethno-lingual identities. The 1998 Census catalogued that the city comprised of — Urdu Speaking – 48.52%, Punjabi – 13.94%, Sindhi – 7.22%, Pashto – 11.42%, Balochi – 4.34%, Seraiki – 2.11 and others – 12.44%. Despite serious challenges of governance and infrastructural development, Karachi remains the most dynamic and vibrant city of Pakistan.

Describing the reasons for 4.8% growth of Karachi compared to 2.9% for the country, Taha listed two factors: 1) continuous in-migration beginning with 600,000 refugees at the time of independence; 2) availability of relatively better economic opportunities compared to other parts of the country. The late 60s and 70s saw the green revolution’s mechanization of farming creating excess rural labor, industrialization started apace with construction of Steel Mill and Export Promotion Zone supported by Port Qasim. The magnitude of employment opportunities could be assessed by the expansion of trade as the Karachi port handled 26 million tons of cargo in 1991 compared to just 2.8 million in 1951. Karachi continues to reinforce the linkage between migration and opportunity. Iranian Revolution and Soviet intervention in Afghanistan (1979) pushed another wave of migrants. More recently displaced people from FATA and other tribal areas of the country have also poured into Karachi.

Taha threw light on another facet of Migration—the illegal settlements which have made Karachi home to thousands of migrants since 2002. His study specifies economic hardship – 60%, forced migration -15%, natural disaster – 5%, conscious decision – 5%, social connection – 12% and seasonal migration – 3% as the migratory reasons. But these numbers underplay social connection with existing residents, a factor that encourages people in distress from all across the country to move towards Karachi. This very interplay of social connection, lack of existing housing facilities has led to the city’s ethnic segregation and thus a lack of bridging social capital among communities, creating potential conditions for social conflict. This demographic dynamic, Taha observed led to unplanned illegal settlements reinforcing separation of communities and political reinforcement of ethnic based identity that eventually gave rise to conflicts in Karachi. Demographic factors also have a bearing on electoral politics; for example, until the 1977 elections, Karachi voted across ethnic lines returning nine opposition leaders to the national assembly. It was only the 1988 elections held at the heels of 1984 and 1986 conflicts between the Urdu speaking and Pathan communities that saw the rise of ethnicity based politics in Karachi. Due to paucity of quality research on the nature and number of emerging social/political conflicts in Karachi, researchers and policy analysts frame these conflicts by focusing on Mohajir and Pathan communities who interestingly are neither competitor in business; have no competing electoral constituency, no cultural conflict or a majority-minority issue. Thus, Taha asserts that the clashes were politically motivated for ulterior designs of the military-civil bureaucracy and the political leadership.

Poor urban planning is another issue that Taha raises while tracing the woes of Karachi. He explores the various city plans over the country’s history. The Merz Rendall Vatten (MRV) plan of the 1950s was designed by a Swedish firm which proposed a road network and a mass transit rail system keeping in view of the future expansion of the city. It envisaged refugee settlements in high rise apartment buildings in the city centre along with the university and government buildings. But its population growth projections of 3 million by year 2000 were grossly underestimated. A major reason for its lack of implementation was the 1953 anti-government student protests which convinced the then government to keep the students and the general population away from one another and also from the center city.

It’s no surprise that the next Greater Karachi Resettlement Plan (GKRP) proposed creating new townships in the outskirts of the city, in the East – Korangi and North – New Karachi Township. It envisaged accommodating 119,000 homeless in the short term and developing housing for 300,000 families over twenty years. The plan included developing large industrial areas for employment opportunities in the vicinity of new townships to make them self contained. Though the plan facilitated removal of slums from inner city, the failure to meet the target of constructing 45,000 one room houses as only 10,000 units were built until 1964, of establishing a working public transport system or even a road network to planned sites instead led to the development of squatter settlements along the road linking new townships to the city centre. Still the plan had long term influence on city’s development as the direction of city growth continues towards the North-east.

The Karachi Master Plan (KMP) of 1974-85 was the first indigenous attempt to develop an integrated plan with a Land use strategy identifying areas for institutional development, recreation, environment enhancement and industrial growth. It included 590,000 new houses for 1.5 million people, improvement and regularization of Katchi Abadies (slums) and new support schemes for low to moderate income households. It planned for a city bus system,

extension of circular railway, and bridges on the Lyari River. But again this Plan could not be fully implemented as it regularized only 18,000 of the 223,000 informal houses. Similarly lack of technical & social services and most importantly credit kept low income groups from making use of government schemes leading to further growth of the informal housing sector. The provision of land and credit at subsidized rates to large private developers instead saw the development of luxury high rise apartment buildings in the West of the city along Clifton Beach leading to a class based demographic divide of the city. During this period Taha notes that the dynamics of squatter settlement and the building mafia had become so powerful that the Karachi Master Plan 1986-2000 did not even consider the informal sector because the strength of entrenched vested interests (mafia and their links in the administration) was far greater than the institutional capacity of the Karachi Development Authority (KDA).

Analyzing the four urban development plans for Karachi, Taha argued for an efficient and effective land development control system integrating both negative (zoning, building permits, vacant land taxation and use of leases) and positive (development of urbanized land, regularization of Katchi Abadis and provision of infrastructure for new projects) control functions. Though he mentioned inadequacies of the legal framework composed of various ordinances, inequities in taxes leading to revenue shortage for city administration, more importantly it was the fragmentation of municipal laws, decision making bodies and various municipal service providers that were at the root of the problem. As KDA controlled only 29.3% of the area of Karachi, it was no surprise that Karachi presented a picture of one of the most unplanned cities of the world. Life in Karachi had become an increasingly un-regulated affair with informal housing dominating the city and the population of Katchi Abadis increasing from 2 million in 1978 to 3.4 million in 1988. Taha articulated how lack of public services provision to the informal sector including a public transport system lack of coordination among various city administration departments and service providers had only led to un-sustainability of the current services infrastructure, an outcome of rising electrical line losses and the entrenchment of building mafias. He argued that only a strong city government could create coherence in policy making by bringing together the various agencies but this required a strong political will.

Discussing Lahore, the second largest city and the provincial capital of Punjab, Riaz and James concentrated on environmental aspects of population growth; analyzing air and drinking water pollution and the decrease of tree plantations in the city. The growth of Lahore had proceeded South and Southwest because of the Indian border in the East and flood conditions in the North. The population of the district stood at 8.2 million according to Punjab Development Report 2008 increasing from 0.85 million in 1951 and 6.32 million in 1998, at the growth rate of 3.5%. The in-migration to Lahore was lower and different from Karachi as 70.5% of migrants were from the same province compared to 12.1% from the rest of the country and 17.4% from other countries (predominantly Afghans). Thus Lahore was culturally much more homogenous which encouraged minority ethnic groups to assimilate rather than assert for a separate identity.

Raising pollution as a major health and life hazard for the city, they pointed out that 1.9% of city residents die because of air pollution every year. The main source is vehicular pollution, which is directly linked to population of the city. Further more the study noted that Punjab government’s water sample testing of 222 locations across the city indicated contamination in 80% samples. In another study, the Pakistan Council for Research in Water Resources found all 16 samples from Lahore to be unsafe for the last four consecutive years owing to presence of arsenic, iron and fecal coli form bacteria. The microbial contaminants cause cholera, diarrhea, dysentery, hepatitis and typhoid while arsenic causes cancer, hypertension, heart and kidney diseases.

The other casualty of urban sprawl and population growth is forest covered area which allows the concrete built city to breathe. But horizontal rather than vertical expansion of Lahore has led to suburbanization with the poor living on the periphery without proper infrastructural facilities and the rich moving into gated communities at city out-skirts. Suffering from a decaying public transport system while encouraging citizens’ personalized transport, the city has witnessed mushrooming of CNG gas stations and petrol pumps in addition to road widening causing further de-plantation of trees and decrease of open spaces. But city authorities have not even planted all available area as out of the total area of 9,706 acres, 5,011 are cropped while 4,695 acres still remain available.Urbanization demands urban planning to manage excessive population growth of large urban centers. However, it is equally important to understand that mega cities are an outcome of a skewed national development strategy which concentrates and limits employment creation, infrastructural and social sector development to only a select few large cities. This momentum is carried by the private sector which invests based on its infrastructural and human resource needs requiring good quality schools and hospitals for employee retention, while the media only covers and caters to large urban and political centers dictated by its advertisers’ marketing needs. This leaves no option for rural migrants (elite or underprivileged) but to move to the mega city by passing the underdeveloped mid sized town. 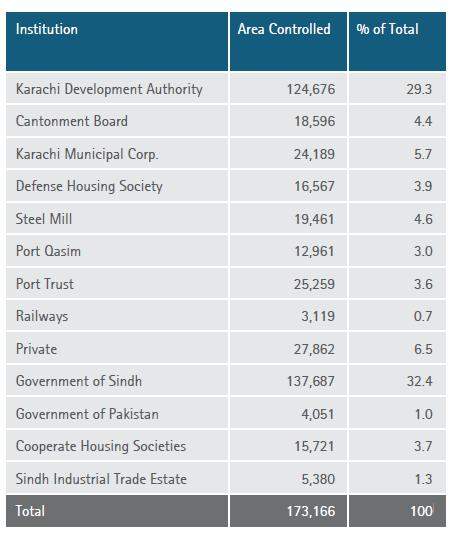