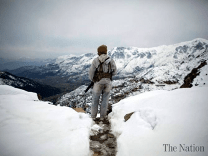 The Siachen[1] glacier, located at the Indian subcontinent’s northwestern edge, has been a disputed region between the India-Pakistan border since the 1980s. The Siachen dispute finds its roots in the armed conflict over the state of Jammu and Kashmir since India and Pakistan became independent in 1947. As a result of the conflict, both the countries occupied parts of the disputed territory without reaching a consensus or solution until July 1949 when a cease fire line (CFL) was formed as part of an agreement under the United Nations signed in January 1949. The CFL was expected to put an end to the hostility between the two armies. The CFL agreement was however vague. It only provided details and coordinates till a certain point on the border completely ignoring the northwestern edge since it had always been considered inaccessible and uninhabitable due to its difficult terrain and harsh weather conditions. Later in 1972, the CFL was scrapped and a new Line of Control (LoC) was established however the issue of the boundary line dividing the Siachen Glacier region remained unaddressed. The newly formed LoC agreement stated: “the LoC[2] runs north-eastwards to Thang (inclusive to India) then eastwards joining the glaciers.” China’s Xinjiang province’s southern border meeting the Indo-Pak border in the region created further confusion as the province itself is considered to be disputed territory.[3] The article aims to provide potential solutions to the ongoing conflict while predicting major shock events that could result in extreme consequences.

Before 1970, no attempts were made by the Pakistan government to politically integrate the northern areas of Pakistan particularly Gilgit-Baltistan along with Jammu and Kashmir. In 1972 as President Zia ul Haq hosted a dinner in Gilgit and also showed interest in including Gilgit Baltistan into mainstream politics, India’s concerns grew. India felt increasingly threatened as it found out that Pakistan is supporting international expeditions to the Siachen Glacier and planning to establish military outposts to stop Indian interference. Not only did India follow suit and decided to lead expeditions in the region, it also carried out a military operation in the region by the name of Meghdoot in 1984. Military forces of the two countries fought against each other in the world’s highest battleground, approximately 5000 meters above sea level.[4] India[5] justified launching Operation Meghdoot by claiming that it was in retaliation to Pakistan’s plans of launching a military operation to occupy the Siachen Glacier. India gained tactical advantage by occupying two key northern passes. Pakistan’s military response came 12 days later and remained unable to depose the Indian armed forces from their positions.[6] The armed[7] conflict in 1984 led to both the countries stationing their troops at areas that were occupied by them to date. Several attempts have been made to resolve the Siachen Glacier conflict since January 1986 however officials of the two countries have failed to reach a consensus. India refuses to withdraw its troops from key positions that it occupied in the region in 1984 and Pakistan remains unwilling to accept India’s claims of being the rightful owner of the majority of the territory occupied by it ever since.[8]

While India and Pakistan consider the region to be of strategic and political importance, it is important to understand that the deployment of forces in the world’s highest battleground has an adverse impact not only financially but also on the soldiers and the environment. Due to the harsh weather conditions[9] and rough terrain of the Siachen Glacier, the area remains inaccessible even by the most durable vehicles. Avalanches make it extremely difficult for the troops to hold ground and when the region is hit by a snowstorm, delivery of essential supplies via air to the soldiers becomes close to impossible. While the high elevation levels of the glacier exceed the flight capacity of India’s heavier helicopters, the lighter helicopters also remain largely unreliable in the region considering that the harsh and unpredictable weather can result in potential emergency landings at any point. Additionally, troops have to tie themselves to each other in order to be able to walk around without risking falling through crevasses. The deployment of troops in extreme weather conditions is also high in cost for both India and Pakistan. In order to survive against the wrath of the cold weather, Indian and Pakistani forces rely on specialized training including ice climbing techniques and avalanche safety. Soldiers require specific equipment such as gun-emplacements and anchor building supplies at the outposts. It has been estimated that Pakistani military operations in Siachen cost between $200 2to $300 million annually.[10] Since the Siachen Glacier has been an inactive warzone for several decades, it is observed that the majority of the soldiers who lost their lives has been a result of the extreme weather. In April 2012, 140[11] People, mostly soldiers and a few civilians, lost their lives as an avalanche hit the region. The fact that more lives have been claimed by the weather than actual gun-fight in the region is alarming to say the least. Soldiers have suffered from pulmonary and cerebral edema along with headaches and hypertension. Military operations and the use of artillery in the region have led to the glaciers absorbing toxins and chemicals, polluting the Indus River headwaters and raising health concerns for both India and Pakistan.[12] The Siachen conflict has often been referred to as unnecessary[13] or nonsensical considering the harsh weather and difficult terrain making it extremely challenging to survive there in the first place. Snowstorms and blizzards can lead to field artillery being buried under snow within minutes, fainting and frostbites are common. Is there really any strategic value attached to the barren land as claimed by the two countries?[14]

Both India and Pakistan are losing more than they are gaining by the continuous deployment of troops in the Siachen region. While it is important to consider the political and national security risk, it is also important to consider the number of lives that have been lost, the harmful impact on the environment and the high cost of training and deploying troops in the region. The Kargil conflict in 1999 makes it more difficult for India to trust that the region would remain peaceful. Additionally, all previous attempts to reach a consensus regarding the demilitarization of the region by either side have failed. However, one question remains: are there other ways to address the national security risk especially since there has been no active conflict in the region from either side for decades? Alternatives to the deployment of troops in the region would lead to a more efficient use of economic and human resources. In addition to that, peaceful collaborative efforts by the two countries would also work towards bringing stability in the region resulting in economic and sociopolitical prosperity. There are however several factors to consider. Some of these are listed below:

Aleena Afzaal is an MA Politics student at NYU. Her research interests include politics of the Indian subcontinent, women’s studies and governance. She is also an MPhil student at CPPG.

Ahmed, Ishtiaq. 2006. “Siachen: A By-Product Of The Kashmir Dispute And A Catalyst For Its Resolution”. Pakistan Journal Of History And Culture XXVII (2): 87-114. http://www.nihcr.edu.pk/Latest_English_Journal/Siachen_A_Bi-Product_of_Kashmir_Dr_Ishtiaq.pdf.

Ko, Leesa. 2021. “In India-Pakistan Standoff, Siachen Glacier Is No Passive Bystander”. State Of The Planet. https://news.climate.columbia.edu/2021/03/05/siachen-conflict-warfare/.

Saleem, A., School of Communication. Siachen Conflict between India and Pakistan: How Politics and National Security Trumps Environmental Concerns. Paper for presentation at the 2015 Conference on Communication and Environment. University of Boulder, Colorado. June 11-14, 2015. https://theieca.org/sites/default/files/conference-presentations/coce_2015_boulder/saleem_awais-1035463731.pdf.