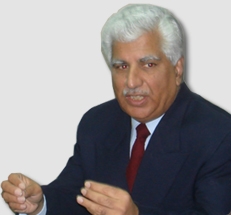 Professor Dr. Saeed Shafqat is an eminent social scientist of international repute. He joined FCCU in 2007 as a Professor and founding Director of the Centre for Public Policy and Governance (CPPG). Besides designing and developing the postgraduate academic programs in Public Policy, he launched the publication of Research and News Quarterly. In 2018 he was awarded the Tamgha-e-Imtiaz in recognition of his services as a distinguished Social Scientist in the field of education, research and teaching. In 2020, the Ambassador of France in Pakistan on behalf of the French government conferred him with the Chevalier des Palmes Acade’miques for his contributions to the advancement of culture and education. Dr. Shafqat was member BOG (2016-2019), National School of Public Policy and a regular guest speaker at the National Defence University and National Management College. He has been Quaid-e-Azam Distinguished Professor and Chair (March 2001 – May 2005), Pakistan Center at the School of international Affairs and Public Policy (SIPA), Columbia University and continued to be Adjunct Professor at SIPA until 2010. For Spring 2012, he was Visiting Professor South Asian Studies, at the College of Wooster, Ohio. He has been Chief Instructor Civil Services Academy of Pakistan, Lahore (1988 – 2001). Over this period of time, he imparted instruction and training to over 1500 under training officers (federal civil servants) who are now serving in different branches of government all over Pakistan. He has also been the President (1990), Institute of Regional Studies Islamabad. He was Executive Director, National Institute of Population Studies (NIPS) 2005 – 2007. AT NIPS Dr. Shafqat led a team of professionals who managed the conduct and successful completion of Pakistan Demographic Health Survey 2006-2007 (PDHS). The PDHS was funded by USAID ($1.29 Million) and Macro International provided the technical support. Dr. Shafqat was instrumental in getting the PDHS 2006-07 Preliminary Findings Report published. He has been President of PAP,2008- 2010.

Dr. Shafqat is on the academic and governing board of several universities and training institutes. He is on the syndicate of University of Sargodha and on the Academic Council of the Government College University. He is also the Chairperson of SDG’s Governance Unit Punjab. Professor Saeed Shafqat obtained M.A (Geography) from the Punjab University. He has M.A (South Asian Studies) and PhD (Political Science) from University of Pennsylvania, Philadelphia. He is a founder member and former Chairman of the Department of Pakistan Studies established in 1973 at the Quaid-e-Azam University, Islamabad. He was awarded the Best University Teacher Award by the Higher Education Commission of Pakistan in 2010.

His research articles on culture, politics, security, relations with the United States and various aspects of public policy and governance, demographic change and civil service reform in Pakistan have been published in journals of international repute. Dr. Shafqat’s books include: Political System of Pakistan and Public Policy (1989) Civil – Military Relations in Pakistan (1997), Contemporary Issues in Pakistan Studies (2000, 3rd edition) and New Perspectives on Pakistan: Visions for the Future (Karachi: Oxford University Press, 2007). He has also co-authored Four Monographs: Pakistan, Afghanistan and US Relations: Implications for the Future (Lahore: CPPG, 2011) and Electoral Politics and Electoral Violence in 2013 Elections: The Case of Punjab (Lahore: CPPG, 2014. Migration, Urbanization and Security: Challenges of Governance and Development in Balochistan (Lahore: CPPG, 2017). His current research is on China’s Rise and its impact across Greater South Asia and the Gulf. His recent publications are:  “China’s Rise: How Is It Impacting the Gulf, Iran, Pakistan and Beyond?” Asian Journal of Middle Eastern and Islamic Studies March 2017) and Saeed Shafqat & Saba Shahid, China, Pakistan Economic Corridor: Demands, Dividends and Directions (Lahore: Centre for Public Policy and Governance, 2018), and Changing Dynamics of China-India Relations: CPEC and Prospects for Pakistan (Lahore: Centre for Public Policy and Governance, 2020). His most recent publication are, Pathways to Governance and Civil Service Reform in Pakistan: Federal, Provincial and Local (April 2020) How Belt and Road Initiative (BRI) and the China-Pakistan Economic Corridor (CPEC) are Reshaping China’s Soft Power? (Co-authored with Ayesha Siddique) Journal of South Asian and Middle Eastern Studies Vol. 44, No. 3, Spring 2021. ‘The China–Pakistan Economic Corridor:

No Courses Added Yet

No Opinion Pieces Added Yet

No Opinion Pieces Added Yet